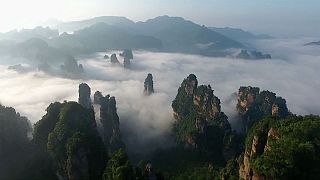 Updated: 10/06/2017
<p>Continuous rainfall has given rise to a sea of clouds in central China’s Wulingyuan Scenic Area in Hunan Province.</p> <p>Vast stretches of lofty mountains enveloped in mist in the Huangshizhai area of the national park seemed to be rolling amid clouds which were flowing slowly at the foot of the mountains. The drone footage shows peaks popping up above the clouds looking just like islands in the sea.</p> <p>“When the sunlight passed through the clouds and spread over the mountains, the peaks were reflected in the clouds, colorful and magnificent, like a magnificent landscape painting slowly unfolding,” reported China’s <span class="caps">CCTV</span>.</p> <p>The rare scenery lasted for three days, long enough for lucky visitors to capture this precious gift of nature.</p>
no comment