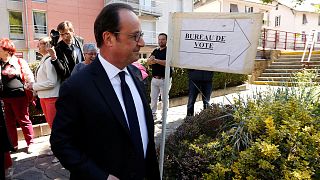 Updated: 23/04/2017
<p>President Francois Hollande has cast his vote in the first round of the French election in his political fiefdom of Tulle in Correze, southwestern France.</p> <p>The incumbent Socialist president made the unusual move last year of pledging to not stand for re-election.</p> <p>Hollande was the most unpopular French leader in the country’s modern history.</p>
no comment