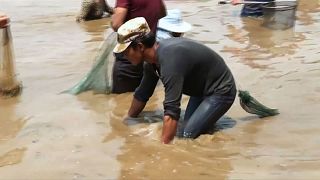 Updated: 14/04/2017
<p>Locals held a fishing carnival in Menglian County of southwest China’s Yunnan Province to celebrate the traditional Dai New Year on Wednesday.</p> <p>Thousands of fishermen armed with simple nets and baskets leaped into the Nanlei river, wading into waist-deep water to make a catch as fast as they could.</p> <p>In just a matter of minutes, some of the fishermen had already caught five to six fish, including catfish and bighead carp weighing more than 10kg.</p> <p>The carnival, which is now in its thirteenth year, has become a unique activity during the traditional New Year celebrated by the Dai ethnic minority inhabiting the region. </p> <p>It is also called the Water-Splashing Festival and usually falls in mid-April.</p>
no comment