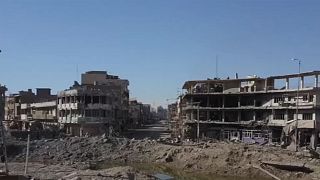 Updated: 06/04/2017
<p>The Iraqi military is battling Islamic State group in a final push to take control of the parts of western Mosul that are still held by the extremist group.</p> <p>Aerial footage of Mosul’s Dawasa neighbourhood has revealed the massive scale of the destruction left by the fighting of previous weeks.</p>
no comment