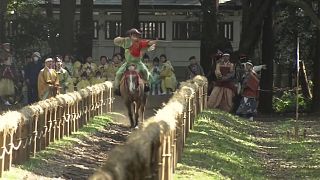 Updated: 05/04/2017
<p>People gathered to celebrate Yabusame, an ancient archery event held annually at Miyazaki Shrine in western Japan. </p> <p>Archers on horseback in traditional Kamakura bushido costumes showcase their shooting skills. </p> <p>The colouful knights gallop at full speed while aiming to hit targets on the horse-riding course. </p> <p>If the target is hit, confetti is released, to the delight of the audience.</p> <p>The event is held in April when the blossom is in full bloom.</p> <p>It’s believed Yabusame dates back to the 12th century and was created as a way to please and entertain the gods that watched over Japan.</p>
no comment