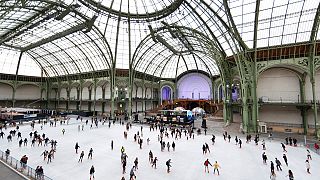 Paris gets its skates on!

Updated: 17/12/2016
<p>Inspired by vintage scenes of Paris and Moscow in winter, the ice skating rink in Paris’ Grand Palais has opened its gates to holiday revellers. </p> <p>At 2,700 square metres, creators say it is the largest non-permanent indoor ice-skating rink in the world.</p> <p>The idea was also to highlight the steel and glass architecture of the Grand Palais, one of Paris’s foremost exhibition spaces.</p> <p>A show featuring skating stunts and acrobatics kicked off this third edition of the Grand Palais des Glaces on Thursday, December 15.</p> <p>Around 3,000 pairs of bright orange ice skates are available for visitors, including children, who have their own reserved space.</p> <p>The rink will be open until January 2nd.</p>
no comment