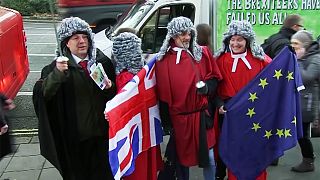 Protests on both sides of the Brexit debate outside Supreme Court

Updated: 06/12/2016
<p>A small group of pro and anti-Brexit protesters gathered outside Britain’s Supreme Court on Monday (December 5), as the government appealed against a court ruling that triggering Article 50, which would start the process of Britain leaving the EU, needs parliamentary approval.</p>
no comment