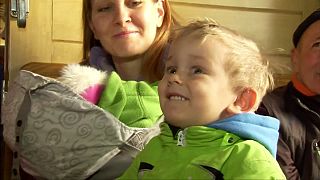 Updated: 05/12/2016
<p>German youngsters enjoyed an early taste of Christmas during a special train ride.</p> <p>They received presents from St Nicholas aboard an old-fashioned stream train in Munich.</p> <p>St Nicholas traditionally gives out gifts in the first week of December in Germany, and is distinct from Father Christmas, who visits on December 24.</p>
no comment