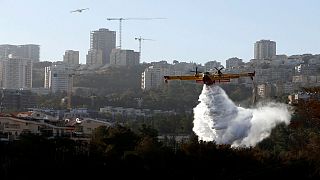 Updated: 25/11/2016
<p>Wildfires tore across central and northern Israel on November 25 forcing thousands of residents to flee the city of Haifa, as leaders blamed arsonists for some of the blazes and branded them “terrorists”.</p> <p>A thick haze of smoke hung over Haifa, which overlooks the Mediterranean Sea. Schools and universities were evacuated and two nearby prisons transferred inmates to other jails, a prison service spokesman said. </p> <p>A lack of rain combined with very dry air and strong easterly winds has spread the fires across the centre and north of the country this week, as well as parts of the West Bank. Hundreds of homes have been damaged or destroyed but no deaths or serious injuries have been reported.</p>
no comment