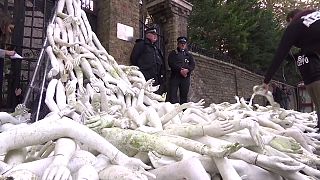 'Body parts' piled up outside Russian embassy in London

Updated: 04/11/2016
<p>Eight-hundred mannequin limbs were dumped outside the Russian embassy in London to protest over Moscow’s actions in Syria.</p> <p>Two protesters also locked themselves to the gate of the embassy.</p> <p>Protesters said the action was part of a bid to draw attention to the “terrible horrors that the Russian government has been part of in Syria”.</p>
no comment