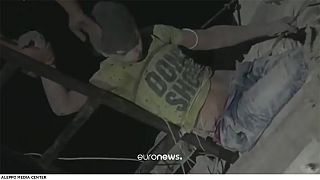 Updated: 18/10/2016
<p>This is the moment rescuers saved a boy left hanging precariously after more bombing in besieged Aleppo.</p> <p>It was one of 40 airstrikes in opposition-held areas of the Syrian city on Sunday, October 16, which left at least 49 people dead and 79 injured, according to the Syrian Civil Defense authority.</p> <p>It said many people were trapped in rubble, including the boy in this footage, who was hanging to the upper floor of a bomb-hit building.</p>
no comment