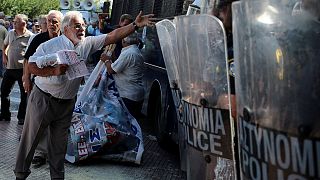 Updated: 04/10/2016
<p>Greek police fired tear gas and pepper spray at pensioners during an anti-austerity protest in which some of the elderly demonstrators tried to tip over a riot police bus blocking a road to the prime minister’s office.</p> <p>More than a thousand people, some of them with canes, took part in Monday’s demonstration against more cuts to pensions.</p> <p>No arrests or injuries were reported.</p>
no comment