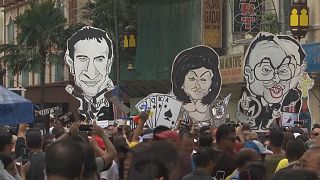 Hundreds of protesters marched in the heart of the Malaysian capital on Saturday (August 27) calling for the arrest of an unnamed high-ranking government official who U.S. investigators say received $700 million skimmed from a sovereign fund.

The lawsuits repeatedly referred to a high-ranking official, only identified as “Malaysian Official 1,” who received some of the misappropriated funds. A source familiar with the U.S. investigations has told Reuters that the unnamed official is Prime Minister Najib Razak, who has repeatedly denied any wrongdoing.