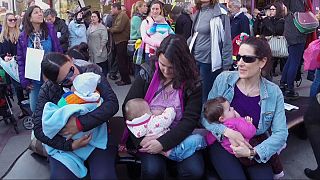 The right to breastfeed

Updated: 25/07/2016
<p>Hundreds of Argentine women came out in greater Buenos Aires Saturday (July 23) to rally in defence of their right to breastfeed in public whenever and wherever they wish. The demonstration was in response to a recent incident in which a San Isidro woman was threatened with arrest after breasfeeding in public. The local government has since released a statement regretting the incident and defending mothers’ liberty to breastfeed.</p>
no comment