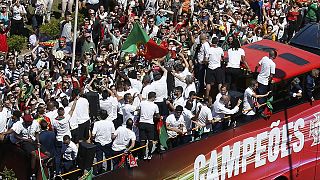 Updated: 12/07/2016
<p>Tens of thousands of people welcomed back the Portugal football team in Lisbon on Monday after the team won the European Championship, its first major trophy.</p> <p>Dozens of airport staff gathered on the tarmac to cheer the players as they arrived from France just after midday. </p> <p>Captain Cristiano Ronaldo and coach Fernando Santos lifted the cup to great applause as they stepped out of the plane.</p> <p>The streets around the airport were also packed with well-wishers to celebrate the team which travelled in an open-topped, double-decker bus to meet Portuguese President Marcelo Rebelo de Sousa at his official residence in Belem.</p>
no comment