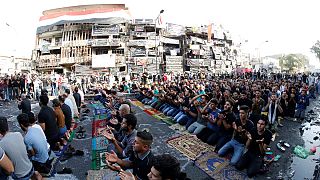 Updated: 07/07/2016
<p>Sunni and Shiite Muslims in Baghdad hold a memorial vigil for the estimated 250 killed in a massive suicide bombing, the worst to hit the city since the 2003 U.S.-led invasion.<br /> Muslims gathered at mosques across Pakistan on Wednesday morning to perform Eid prayers, marking the end of the holy month of Ramadan.<br /> Muslims in Malaysia gathered at the national mosque in Kuala Lumpur on Wednesday to perform Eid prayers to mark the end of the holy month of Ramadan.<br /> Devout Muslims gathered at Cairo’s Mostafa Mahmoud mosque in the early hours of Wednesday (July 6) for Eid prayers.</p>
no comment