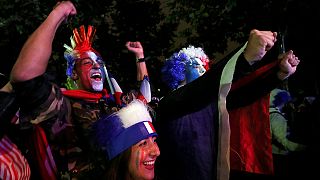 Updated: 04/07/2016
<p>France fans are euphoric after beating Iceland 5-2 to seal their place in the Euro 2016 semi-finals while the Icelandic crowd are disappointed but still proud of their team.</p> <p>French supporters congratulated their team waving France’s red, white and blue flags and honking their horns. Motorists drove through the rain and past police and soldiers lined along Paris’ Champs Elysee Avenue.</p> <p>France, who had not been past the quarter-finals since they won the tournament in 2000, eased off and cruised home and will no doubt feel they are warming up nicely ahead of Thursday’s (July 7) semi-final against world champions Germany in Marseille.</p>
no comment