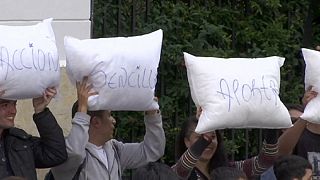 Updated: 21/05/2016
<p>Hundreds of university students staged a pillow fight in the Colombian capital of Bogota as a symbolic act carrying a message of peace. Organiser Maria Fernanda Carrascal explained that they hoped this pillow “war” would be the last that Colombians would engage in.</p> <p>Colombia’s government and the rebel Revolutionary Armed Forces of Colombia (<span class="caps">FARC</span>) have been negotiating a peace accord since 2012 that would end their more than 50-year war.</p>
no comment