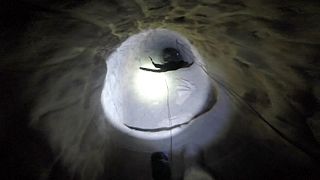 Drug tunnel between Mexico and USA

Updated: 21/04/2016
<p>US Border Patrol released a video of an 795-metre underground tunnel used to ferry drugs between San Diego, <span class="caps">USA</span>, and Tijuana, Mexico. According to the authorities, almost a ton of cocaine and six tons of marijuana were seized during the operation.</p>
no comment