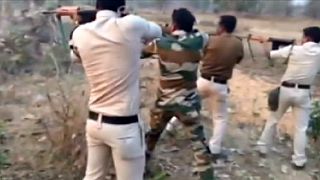 Updated: 14/03/2016
<p>A bear has been shot dead after a hunt in India’s central state of Chhattisgarh, after it killed two villagers . Police and Forestry officials have decide to kill the bear, after trying to tranquilize her. A forest ranger died in this operation. According to the head of the local police of the Mahasamund district, “There was no other option”. The slaughtered animal is a black sloth bear, very common in this region.</p>
no comment