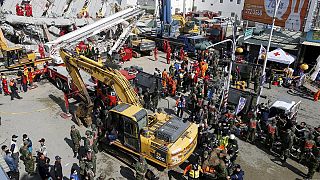 Updated: 07/02/2016
<p>Drone footage shows the collapsed Wei-guan Golden Dragon Building, an apartment tower in Tainan, Taiwan. The building was toppled by a 6.4 magnitude earthquake on Saturday (5 February). At least 26 people are known to have died in the quake, most of them at the Wei-guan Golden Dragon Building. Rescue efforts were continuing on Sunday, with dozens of people still believed to be trapped inside.</p>
no comment