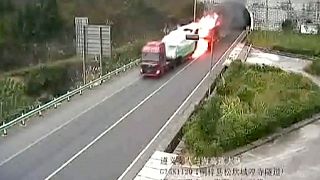 Updated: 09/11/2015
<p>The driver of a lorry that caught fire in a tunnel in China made a brave decision to accelerate and steer it out, saving other motorists from harm.</p> <p>It is unclear why the truck burst into flames on the G75 Expressway in southwest Guizhou Province on Friday.</p> <p>Surveillance video from traffic police showed it travelling at speed out of the tunnel, trailing with heavy flames.</p> <p>The lorry driver was able to stop the vehicle and escaped without injury.</p> <p>The truck’s trailer was completely destroyed after the fire was put out.</p>
no comment