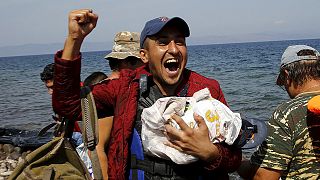 Updated: 22/09/2015
<p>Fewer boats than normal carrying Syrian refugees and migrants from elsewhere landed on the Greek island of Lesbos as a storm threatened to hit. A Reuters photographer on the island, close to the Turkish coast and a gateway for migrants seeking to enter the European Union, said only three boats had landed, compared with around 20 on other mornings.</p>
no comment