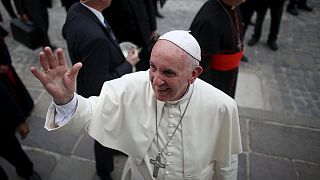 Updated: 21/09/2015
<p>Pope Francis celebrated Mass with tens of thousands of Cubans in Havana’s Revolution Square. The political heart of Cuba, it is where the government stages its biggest rallies. </p> <p>To welcome the pontiff, who helped bring about the recent rapprochement between Cuba and the United States, a giant poster of Jesus Christ was hung nearby. As the Pope greeted the crowds from his “popemobile”, a small group of people was escorted from the area by authorities after reportedly attempting to disrupt proceedings.</p>
no comment