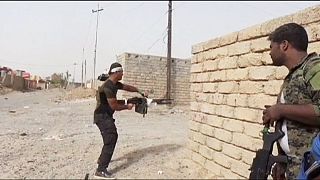 On the frontline in the battle with ISIL in northern Iraq

Updated: 16/09/2015
<p>This is life on the frontline in the northern Iraqi town of Baiji as Shi’ite fighters battle to clear <span class="caps">ISIL</span> militants from the area.</p> <p>The town, about 190km north of Baghdad, has been a battleground for more than a year since its seizure by Islamists in June 2014.</p> <p>Hashid-al-Shaabi, the group that released the footage, said its advance was being slowed by an <span class="caps">ISIL</span> sniper.</p>
no comment