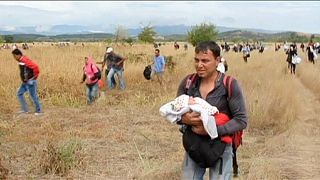 Updated: 23/08/2015
<p>These are the desperate scenes at Greece’s border with <span class="caps">FYR</span> Macedonia as overwhelmed security forces made sporadic attempts to stem the flow of migrants and refugees heading northwards.</p> <p>Hundreds of migrants, many of them refugees from the war in Syria, succeeded in crossing the border.</p> <p>Riot police set off stun grenades and hit migrants with batons but that did little to stop them passing into <span class="caps">FYR</span> Macedonia.</p> <p>Skopje had declared a state of emergency on Thursday (August 20) and sealed its southern frontier to migrants pouring in at a rate of 2,000 per day en route to Serbia then Hungary and the Europe Union’s borderless Schengen zone.</p>
no comment