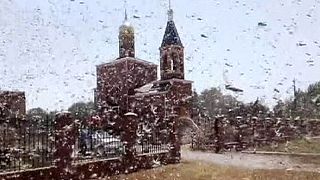 Invasion of the locusts in Russia

Updated: 30/07/2015
<p>Thousands of locusts swarming the Russian village Achikulak in Stavropol Krai are destroying crops, according to local reports. The Ministry of Agriculture of Stravropol Territory reported that swarms of migratory locusts in the south of Russia began on July 20 and have since spread to cover an area of about 90,000 hectares, leading officials to declare a state of emergency in three regions.</p>
no comment