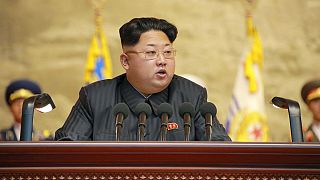 Updated: 28/07/2015
<p>North Korea has held its fourth national conference for war veterans, marking the 62nd anniversary of the Korean War Ceasefire Agreement. North Korean leader Kim Jong-un praised veterans for their devotion to the country. The Korean War armistice was signed on 27 July 1953, which ended the fighting but left the Korean Peninsula in a state of war.</p>
no comment