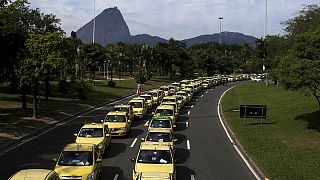 Protest against Uber in Brazil

Updated: 25/07/2015
<p>Thousands of taxi drivers took to the street in Rio de Janeiro to protest against the ride-sharing mobile app Uber. Taxis denounced the legality of Uber, especially the fact that the company’s drivers do not pay the same licences and taxes. While some Brazilian cities, such as Brasilia and Sao Paulo, are in the process of banning Uber, such legal action is not being brought against the app in Rio de Janeiro for the time being.</p>
no comment