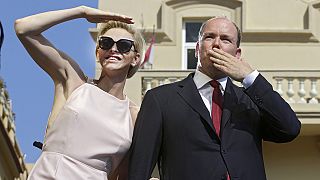 Updated: 12/07/2015
<p>The people of Monaco gathered outside the royal palace on Saturday amid celebrations to mark 10 years of Prince Albert’s rule. </p> <p>The Prince and his wife Princess Charlene emerged to a rapturous reception. The former swimmer from South Africa went on to surprise everyone by making her first ever speech in French. The royal couple’s babies, Jacques and Gabriella, were then brought onto the palace balcony.</p> <p>Celebrations were due to continue on Sunday with a free concert in which British singer Robbie Williams was due to perform.</p>
no comment