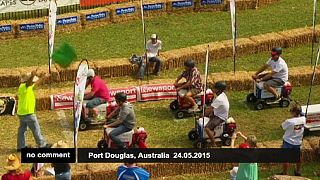 Updated: 25/05/2015
<p>Australia has hosted one of the most bizarre races ever seen – the world’s first motorised cooler championships.</p> <p>Held in Port Douglas, a global field of 42 competitors took part. But it was local man Darren Thompson who claimed victory with a time of two minutes 17 seconds.</p> <p>Coolers are portable boxes used to keep food and drink at low temperatures.</p> <p>The championships formed part of Port Doublas’ Carnivale celebrations.</p>
no comment