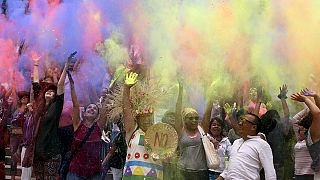 Updated: 24/05/2015
<p>Hundreds of boisterous and colourfully dressed protesters made their way through Mexico City Saturday (May 23) protesting the transnational company Monsanto and the production of genetically-modified corn by large multinational corporations in the Latin American country widely believed to be the birthplace of the staple grain.</p>
no comment