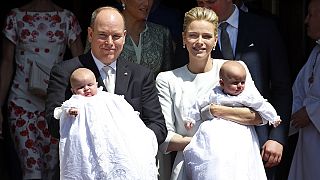 Updated: 10/05/2015
<p>A week on from the birth of Princess Charlotte to Britain’s Duke and Duchess of Cambridge, royal babies were back in the limelight on Sunday (May 10).</p> <p>Monaco’s Prince Albert II and Princess Charlene had their baby twins baptised at the principality’s cathedral.</p> <p>Jacques and Gabriella were born on December 10 at the Princess Grace hospital, named after their grandmother, film star Grace Kelly who died in a car crash in 1982.</p>
no comment