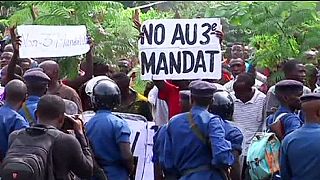 Updated: 05/05/2015
<p>Four protesters were killed in Burundi on Monday as demonstrations against President Pierre Nkurunziza’s decision to seek a third term in office ran into a second week. Hundreds rallied on the streets of the capital Bujumbura, saying Nkurunziza’s bid for a third term violated the constitution. The government has called the demonstrations an “insurrection” and accused protesters of stoking violence.</p>
no comment