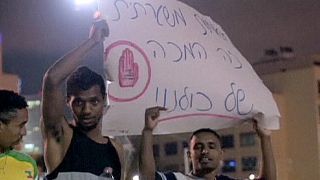 Updated: 04/05/2015
<p>Police on horseback charged hundreds of Ethiopian citizens in central Tel Aviv on Sunday as an anti-racism protest descended into one of the most violent demonstrations in the city in years. <br /> The protesters, mostly Israeli Jews of Ethiopian origin, were demonstrating against police racism and brutality after a video clip emerged last week showing policemen shoving and punching a black soldier. <br /> The protest was mostly peaceful during the day, but by nightfall became violent with at least 20 officers hurt and “multiple protesters” arrested.</p>
no comment