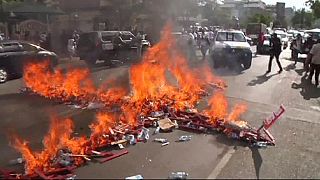 Updated: 26/11/2014
<p>Hundreds of Kenyans took to the street in the capital Nairobi on Tuesday (November 25) protesting against government inaction in the face of rising insecurity and terrorism in the country. </p> <p>The march and sit-in was triggered by the execution of 28 people on a Nairobi-bound bus in the far northeast of the country last weekend. Responsibility for the attack has been claimed by al-Shabaab, an al Qaeda-linked Islamist militia group in Somalia.</p>
no comment