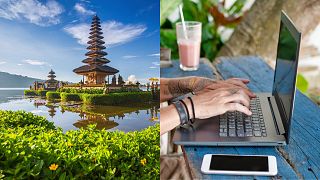 The laws - which take effect in three years - were initially designed to apply to locals and tourists alike, with a punishment of up to one year in prison.

The governor of Bali has since indicated that the island authorities will not check the marital status of tourists.

Indonesia has long been the destination of choice for digital nomads - those who take advantage of remote working to head to another country.

The community has had mixed reactions to the new laws.

While some fear an “assault on bodily autonomy”, others accuse the media of sensationalising the story.

What do digital nomads in Indonesia think of the new pre-marital sex law?

Human rights groups fear that the draconian legislation - dubbed by Australian newspapers as the “Bali bonk ban” - marks a shift towards conservative fundamentalism.

The tourism industry isn’t particularly happy, either. Maulana Yusran, the deputy chief of Indonesia’s tourism industry board, says the code is “totally counterproductive” and will dissuade visitors and expatriates from coming to the country.

So what do these expatriates think?

According to a poll conducted by Euronews Travel in Bali’s largest Digital Nomad social media group, many digital nomads share the concerns of these groups.

“Are public servants supposed to regulate personal matters of adults? Of course not,” she said.

“The government (especially the police division) SHOULD have more serious issues to handle than family dramas.”

These concerns are echoed by British expat Jennifer McGee - especially in regard to local people.

“I’m not concerned for tourists because we get to go home. I am more concerned for people who actually live here. I know Indonesians here in Bali and also in Jakarta who aren’t married but live with their partner and have done for a long time,” she said.

How will LGBTQIA+ people be affected by Indonesia's ban on sex before marriage?

“I also know people from the LGBTQ+ community, this doesn’t bode well for them, as gay marriage is still illegal. This law lessens bodily autonomy," continues Jennifer.

“What consenting adults do in private with their bodies shouldn’t be the business of anyone else, including governments, regardless of culture or religion."

The law will be especially difficult for LGBTQIA+ locals, because same-sex marriage is not legal in the country. This leaves no legal way for queer couples to live together.

One woman - who did not want her name used, but who has lived in Bali as a remote worker for 12 years - described the ban as the “death” of Indonesia’s international appeal.

“It’s scary for everyone here, not just the sex ban, but the rest of the laws too,” she said.

“I think it will definitely drive visitors away.”

Some believe the ban won't be actively enforced

However, other digital nomads were blasè about it, insisting that it was political performance that would not be actively enforced.

“I've experienced a similar cohabitation law in Vietnam which was thrown out due to being too hard to enforce. People will just be more discreet.

Others pointed out that the law requires direct family members to press charges against the individuals concerned.

“A) Only direct family members can press charges and B) the new law takes effect in 3 years from now and C) it is not even signed yet,” said Indra Devine.

At least five remote workers accused the ‘media’ of “overhyping” the story.

Under the law, charges can be based only on police reports lodged by a spouse, parents or children.

In practice, it will be difficult to enforce - millions of unmarried couples already live together in Indonesia.

It will come into effect in three years, when it is signed into law by the president.

What other rules are contained in the criminal code?

Australian digital nomad Sara Clark said that the attention attracted by the sex ban was obscuring the most dangerous parts of the law.

“This isn’t just about the marriage thing, which will be hard to enforce - particularly for tourists,” she said.

“It’s more about what it means for Indonesian democracy.”

The extramarital sex ban is not the only conservative rule included in the new penal code. The promotion of contraception is illegal, and abortion is a crime (with exceptions for women with life-threatening medical conditions and for rape, provided that the foetus is less than 12 weeks old). This is in line with the country’s existing regulation.

Rights activists have been troubled by the restoration of a ban on insulting a sitting president and vice-president, state institutions or national ideology.

This reinstates an old law annulled by Indonesia’s top court in 2006 - and makes offences punishable by up to three years in jail.