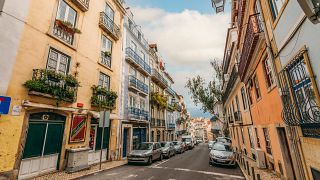 Are you the kind of traveller who likes to stroll the streets on holiday?

Exploring on foot means getting a glimpse of the hidden parts of a city and having a one of a kind experience even when visiting the famous sights.

With compact historic centres and so much architectural beauty on show, many European cities are perfect for walking.

If you want to book a city break where rambling and roaming are top of the agenda, then check out these five cities.

It is well worth the effort of exploring the steep streets of Lisbon on foot.

The historic Alfama district is a labyrinth of winding streets lined with pastel-coloured houses and cafès.

Climbing upwards is a sure way to stumble across one of the neighbourhood’s many panoramic viewpoints.

At the Miradouro de Santa Luzia or the Miradouro das Portas do Sol, people gather to watch spectacular sunsets over the city and the Tagus river beyond.

In the evening, stroll through the narrow streets and listen for the sounds of melodious fado music emanating from local restaurants.

For less intense ambling, head down to the Baixa area of town by the waterfront. After an earthquake in 1755, this district was completely rebuilt with wide, elegant streets in a grid pattern.

The boulevards are lined with pretty tiled apartments in a stylish neoclassic design known as Pombaline.

Make sure you stop in at one of the many bakeries in this district for a pastel de nata, a typical tart filled with egg custard, and numerous other tempting treats.

Meander in Venice and marvel at its historic sights

Venice’s lack of roads isn’t the only reason to pack comfortable shoes. The small island city is the perfect size to explore on foot.

Many of its most famous sights are located close together, too. Head to St Mark’s Square, Venice’s spectacular piazza, and you’ll find several of the city’s iconic monuments nearby.

Facing the square is the 900 year old Basilica of St Mark, filled with glittering gold mosaics.

Walk a few steps and you are standing below the Campanile, a bell tower you can climb for breathtaking views across the city’s jumbled red roofs.

Next to the ancient church is the Doge’s Palace, an ornate pale pink Gothic building that was once the residence of the heads of the Venetian Republic.

Meander around the corner, down the Riva degli Schiavoni and you’ll arrive at the Bridge of Sighs.

This white limestone structure was given its poetic name by Lord Byron as a reminder of the anguish of prisoners getting their last glimpse of the floating city.

For an evening jaunt, head to the Jewish Ghetto where you can peek in the windows of independent galleries and kosher bakeries.

Then walk on to the Fondamenta della Misericordia, one of the most picturesque canal-side streets.

As you stroll past Gothic palaces and wrought iron bridges, stop in at the numerous buzzing bars for a spritz and pre-dinner snack.

The compact historic centre of Edinburgh rewards walkers, though be prepared to get a bit out of breath.

Begin in the Grassmarket, an open area with old pubs and a view from below of Edinburgh Castle.

Then wind your way up Victoria Street lined with brightly coloured 19th century buildings housing shops including a famed cheesemonger and an elegant menswear store.

Cross over and continue up to George Street, the city’s most refined road lined with stylish 19th century residences and luxury shops.

Alternatively, wander all the way down the Royal Mile, slipping off into the dark sidestreets to get a real taste of medieval Edinburgh.

At the bottom of the hill, drop in at the regal Palace of Holyroodhouse. Then stride out into grassy Holyrood Park and hike up Arthur’s Seat for mesmerising views all the way out to the sea.

Soak up Seville’s sights from the streets

Ambling aimlessly around the historic centre of Seville is a great way to stumble across bold Baroque churches towering over tiny tapas bars.

Once you’ve got pleasantly lost in the narrow streets, direct your steps to the monumental Gothic Cathedral of Seville.

If you’re just passing by, look out for the intricately decorated Moorish minaret, known as La Giralda.

If you’re stopping for a visit, seek out the grandiose tomb of Colombus and the church’s lavish floor to ceiling gilded altarpiece.

Walk a little further and you reach the Plaza de España, a square whose crowning feature is a vast semicircular pavilion decorated with brightly coloured tiles.

Starting on the east side of the Danube, in the area that was once Pest, you’ll understand why Budapest has earnt the nickname the “Paris of the East.”

Its wide, tree lined streets are flanked by fabulous Art Nouveau buildings covered in swirling designs of plants and flowers.

And the only way to have enough time to take in all the extravagant decoration of the facades is by walking.

Once you’ve had your fill of fancy buildings, head over to the hills of Buda on the west side of the river.

Through medieval streets with low, pastel coloured houses, you can wind your way to the neo-Gothic Fisherman’s Bastion with arresting views over the Danube and Pest.

Hike up to the mighty Buda Castle, once the residence of the Hungarian kings, and then back to the soaring spires of the 14th century Matthias Church.