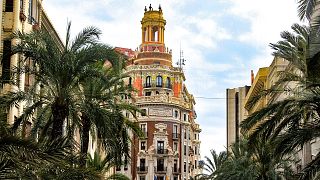 The perfect city for those looking for a fun weekend away, Valencia, Spain's third-largest city, is now competing with the likes of Madrid and Barcelona in the race to win tourists' hearts.

On its side, the city has perfect temperatures - 300 days of sunshine with an average of 18 degrees Celsius -, a thriving gastronomy scene, and lush green spaces, which have helped it secure the title of European Green Capital 2024.

Most of all though, visitors are swept away by the typical Valencian flair, with their laid-back Mediterranean vibe mixing the old-fashioned with the new.

"Valencia is a way of life, it's a factory of emotions," says Francesc Colomer, Secretary of Tourism of the Valencia region. "We're also living in a golden age of Valencian gastronomy."

Here's what you should do on your trip to Valencia.

There are more than 200 rice dishes in the Valencian region, so you have to try at least one. But Colomer recommends visitors should not leave without trying what’s likely the most famous dish in all of Spain, which was born in Valencia in the 1800s: paella.

"Paella is the most important dish we have in Valencia, it's more than just food - it's a ritual of hospitality for us," says Colomer. "It's a plate to share with others, a moment of conviviality."

While the traditional Valencian paella was made with rabbit or snails, you can now find a variety of toppings - from the classic seafood paella, a meaty one and the "fideua", a paella which swaps rice for short spaghetti.

The restaurant "La Pepica", which opened in 1898, is an institution in Valencia, and was once frequented by writer Ernest Hemingway. It still serves delicious, authentic paella to this day.

Immerse yourself in Valencia's complex history

The Moors ruled Valencia for hundreds of years, and the influence of the North African rulers and the Islamic culture is still alive in the city’s architecture and narrow roads, next to the Roman and modern buildings.

A walk in the heart of Valencia's historic centre, Ciutat Vella, will take you past some of the most spectacular buildings in the city. These include: La Lonja de la Seda, a mediaeval silk market of gothic architecture which is also a UNESCO World Heritage site, the modernist Colón Market, now inhabited by fancy food shops and chic cafes, and the ultramodern, futuristic-looking City of Arts and Sciences, a unique building designed by Valencia-native architect Santiago Calatrava. The complex holds an aquarium, a concert hall and a planetarium.

To get a taste of Valencia's life nowadays, walk across the hip neighbourhoods of Ruzafa, with its buzzing street life and new, cool bars and cafes, and El Carmen, an old-town neighbourhood with an underground atmosphere, full of street art.

Celebrate the city's commitment to being green

Valencia will be awarded the title of European Green Capital in 2024, beating the Sardinian city of Cagliari in the final. The award is in recognition of the city’s efforts to hit its green targets, but also for its future projects to improve and expand green space in the area. As a result, Valencia will receive €350,000 to put towards green policies.

You're spoiled for choice in terms of green spaces to explore in the city: Valencia boasts over two million square metres of gardens. A must-visit is the city’s green lungs, the Turia garden, the Botanic gardens and the Viveros.

Hop on a bike to explore the Albufera Natural Park, a rural getaway 10 kilometres away from the city.

There are more than 1,000 traditional music bands in the Valencian region (the internationally renowned "bandes"), many of whom participate in yearly festivals gathering thousands of people, says Colomer.

The region boasts an eclectic music scene, rich with the different traditional folk music styles that have evolved in Valencia over the past centuries, including fandango and jota, which are accompanied by their corresponding traditional dances.

If you're not around for one of the many music festivals taking place in the city, you'll likely be able to experience Valencia's unique music scene in one of its buzzing cafes and bars (like Radio City or Sala Wah Wah), as the city boasts one of Spain's liveliest nightlives.

Whether it's summer or winter, the sandy beaches of Valencia are a must-see if you're visiting the city and its surroundings.

"There are over 500 kilometres of coastline, rich in both landscape and heritage," says Colomer.

If you're staying in the city, the best beaches to reach from the centre are La Patacona, La Malvarrosa, and Pinedo.

La Patacona is an urban beach which is an extension of La Malvarrosa, a busy beach north of Valencia's harbour. Both beaches make the most of their juxtaposing landscapes - with kilometres of white sand - meeting an array of bars and cafes along the promenade.

Pinedo is a blue flag beach - a recognition of its cleanliness and the good services provided there - less than a 15-minute drive away from Valencia's city centre. It's usually quiet, allowing visitors to take long walks and enjoy the beauty of its landscape.

Travel a few kilometres outside of the city and you'll find splendid beaches immersed in the middle of the region’s dazzling nature. There are 22 nature parks in the entire Valencian region, many of which include beaches accessible to the public. Inside La Albufera natural reserve, you'll find the five-kilometre-long beach of El Saler, only a 10-minute drive from the city. Close by there's also L'Arbre del Gos, which remains off the beaten path for most tourists.

Explore beyond the city

If you have any time left, there are wonders in the region beyond the city of Valencia.

Game of Thrones fans will enjoy a visit to Peniscola, a picturesque seaside town featuring an enchanting mediaeval castle, which served as the backdrop for the scenes in Meeren in season six. The best way to travel there is by train.

Only a bus ride away from Valencia is Port Saplaya, a charming fishing village which has been dubbed Valencia's "little Venice."

The region of Valencia also counts several UNESCO World Heritage Sites recognised for their outstanding universal value, from the cave art of the Iberian Mediterranean Basin to the spectacle of gunpowder, fire and music of the Fallas festival.

All in all, there's more than enough for a three-day trip to spin off in a second journey to Valencia.