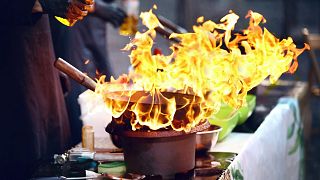 What is the tastiest street food dish in the world?

It’s a hotly debated topic. From Vietnamese Bánh mì and Greek Gyros to Indian Samosas and Mexican Gringas, cities around the globe boast a variety of delicious street dishes.

Ask a dozen people their favourite, and you’re likely to get a dozen different answers.

Here are the top eight according to their rankings. Whether or not you agree, they’re bound to make your mouth water.

Which is the best street food in the world?

According to Taste Atlas, these are the ‘world’s first tacos,’ and first originated in the 1500s in Mexico. Thin slices of flank steak are griddled, then served atop a corn tortilla with coriander.

Carnitas - literally translated as “little meats” - is a Mexican dish of simmered pork. The meat is braised in lard over several hours, and served with coriander, diced onion, guacamole, and tortillas.

Guotie are a Northern Chinese dumpling. Simultaneously fried and steamed, they are typically stuffed with minced pork, Chinese cabbage, ginger, scallions and rice wine. Guotie literally translates as “pot sticks,” and in some parts of the world, they are known as pot stickers.

If you’ve visited Mexico, you’ve probably eaten a Gringa (or ten). Halfway between a taco and a quesadilla, these delicious snacks are prepared by melting cheese between two flour tortillas. Other ingredients vary regionally, but common inclusions are marinated meat, onions, and pineapple.

A paratha is a type of layered bread cooked in ghee (clarified butter). They can be accompanied by pickles, yoghurt, homemade chutneys, or served alongside meat and vegetable curries. They are also eaten plain, or simply dipped in tea.

Variations of Paratha are beloved throughout South Asia, from India and Sri Lanka to Pakistan, Nepal, and Bangladesh.

There are many different varieties of this popular Vietnamese dish, but they all share a common theme of the crusty French baguette.

The bread became popular in Vietnam during the French colonial period. It is stuffed with a fusion of meats and vegetables like pork sausage, coriander, cucumber, and pickled daikon.

Karaage refers to a Japanese cooking technique in which small pieces of meat or fish - usually chicken - are marinated, coated in flour, and deep fried. The word itself translates as “deep-fried Chinese style” - “Kara” means China, and “age” means fried.

The tasty nuggets are usually served with wedges of lemon and mayonnaise for dipping.

These crispy snacks evolved from Chinese spring rolls - hence the word ‘Shanghai’ in the name.

Thin egg crepes are filled with ground meat and deep fried. They are often accompanied by a sweet and sour dipping sauce.

Lumpiang Shanghai not just a street food, however - they are often served on special occasions like birthdays and weddings.

This Malaysian staple secured the top spot in the TasteAtlas rankings. The buttery flatbread is cooked from dough that has been rolled very thin then repeatedly folded, and fried so the texture is simultaneously crispy and fluffy. The dish was brought to Malaysia by Indian migrants, in the 1800s.

Europe’s most exciting new wine destination will surprise you