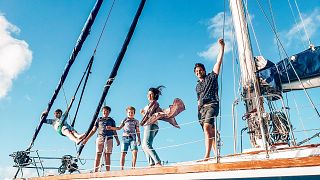 Erin Carey never imagined she would sail across the Atlantic Ocean with her husband Dave - especially not with three young children in tow.

Back in 2015, they were perfectly content, living in Adelaide and working well-paid jobs for the Australian government. So why did the couple leave their home to sail the globe?

“We weren’t sailors. We'd never dreamt of doing anything like this,” says the 41 year-old. “One night, we sat down to watch Netflix and my husband randomly chose ‘Maidentrip’, about Laura Dekker, the youngest person to sail around the world. Something in that documentary made us completely change our lives.”

Their first thought was, could we do this ourselves? A quick Google search helped them discover dozens of families who lived full-time onboard yachts. The couple made up their minds. They would spend the next two years saving and planning to buy a boat, then take a two-year sabbatical to sail around the world with their kids.

Seven years later, the family-of-five are still following their dream. Two years in the Caribbean was followed by an Atlantic crossing to Portugal, followed by Spain, Tunisia, Malta, Italy and Croatia.

Erin and her family are part of a growing community of cruisers, who have given up the rat race to live on a boat. The global sailboat market has grown exponentially in recent years, from €5.7 billion in 2021 to an expected €6.7 billion by 2026, according to The Business Research Company.

So what does it take to go from a complete novice to full-time liveaboard?

How did the Careys prepare for their sailing adventures?

Firstly, Erin and Dave needed to learn how to sail. Over the next 18 months, they joined sailing, sea survival and First Aid courses, as well as completing their boat licences.

Secondly, they needed a vessel. “We didn’t have the money to just go and buy a boat. We had a big mortgage and credit card debt, so we decided to reverse engineer our plan,” explains Erin.

The Careys worked out that a suitable yacht would cost around AUD $100,000 (€64,000), so that figure became their goal. “We made a lot of changes to our lifestyle. We took our kids out of private school. We both applied for promotions at our jobs. We stopped eating out and buying new clothes. My motto became, ‘Do we need this for the boat? If not, I’m not going to buy it.’”

One of the critical decisions the couple made before setting off was hiring Sailing Totem - a blogging, mentoring and sailmaking family - to coach them through the planning stages and boat shopping. “They happened to be in Grenada at the time, so they found our boat for us. We never actually saw it until we flew over and moved onboard.”

It took three months of hard graft to prepare their newly acquired 47ft yacht for the water. Finally, they summoned up the courage to cast off and sail away from Grenada.

The couple juggle work with homeschooling their three boys.

On top of the $85,000 saved to buy a boat, the pair borrowed the same amount of money to live off, which meant that Erin and Dave didn’t have to work for the first 12 months. However, after nine months, Erin felt restless.

“I knew that I didn't want to go back to my old job. Having time and space helped me think about what I really wanted to do.” A chance encounter with the world’s number two sailing YouTube channel, Sailing SV Delos, led to Erin setting up her own adventure travel PR agency, Roam Generation.

Today, Erin is the sole breadwinner, running the agency from her cabin office. Her husband homeschools their three children in the morning and spends afternoons maintaining the boat.

Connecting to the internet is straightforward: Erin just buys an unlimited SIM card in each country and hotspots off her phone to host Zoom calls and respond to emails. “We don’t sail very often. We generally stay in one place for a couple of weeks and sail on the weekends. Our boat is like living in an apartment on the water.”

What are the challenges of living on a sailboat?

While their three boys (aged 13, 11 and 8) love the freedom of boat life, homeschooling remains the most challenging aspect of living on a yacht.

“After four years, we still struggle and don't feel like we’re getting it right,” says Erin. “Our three little boys fight, don’t listen and swing from the rafters. It’s super hard, but we’ve hired a lady to come onboard and help us now.”

Spending every day in close quarters with your family might sound like a breeding ground for trouble, but Erin disagrees. “I never worry that I haven’t spent enough time with my kids, because we’ve been together almost 24/7 for the last five years. How many people get that?” She says it has also made her marriage with Dave even stronger.

Do they see their time living afloat coming to an end soon? “We’ve all agreed that we all want to keep going for a little longer,” says Erin. They plan to spend the European winter back home in Australia, before returning in the spring to sail to Turkey, Morocco and out to Cape Verde. But their schedule remains flexible. “Sailors always say that plans are written in the sand at low tide, so we could really end up anywhere.”

Just like Erin was inspired by Dekker’s documentary, no doubt many will feel equally roused when hearing her story. What advice would she give to other families who want to follow in their tailwind?

“Don’t stress about the fact that you don’t know how to sail. You can learn, it’s not rocket science,” says Erin. “Get a coach like Sailing Totem. They saved us from making silly decisions,” she adds. “Be really strict with your budget for two years and you’ll potentially have a lifetime of sailing… And finally, do your research. If you go slowly and do everything sensibly, then it’s not as scary or dangerous as it might sound.”