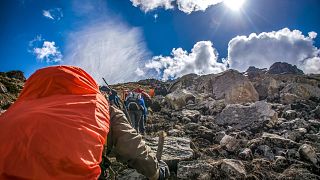 The Camino de Santiago is one of the most walked routes in the history of humanity. Every year almost 350,000 people complete the pilgrimage which ends at the Santiago de Compostela Cathedral.

But that also means the route is busy. While it brings the possibility of making friends with other walkers, it leaves little room for self-reflection.

There are a number of other routes across Europe and the rest of the world, however, that offer the Camino experience. They are also perfect if you’ve completed the famous pilgrimage and are looking for more long distance walking routes.

Here are some of the best alternatives to El Camino de Santiago.

Discover the history of Spain on the Camino Mozárabe

If you want to stick to Spain then there are shorter, tougher trips also taken by Christian pilgrims. The Mozarabic Way or Camino Mozárabe is a series of walking routes that start at various locations throughout Andalusia and converge in Mérida near the Portuguese border.

These were the roads used by Christians in the territory of Al Ándalus, so you can learn about the history of Spain as you walk. Some of the oldest stretches follow Roman roads offering another opportunity for historic discovery.

You can depart from Granada or head inland from Malaga and Almeria, with different paths varying in length and difficulty. In total, the routes are around 1,500km in length running all the way up to the Tomb of Saint James in Galicia.

A 1,400km walking route has just opened in Romania crossing from the north to the south of the country through 108 towns and villages along the way.

The idea was first dreamed up by 52 year old Alin Useriu 10 years ago. He wanted to create something similar to the ancient pilgrim route to El Santiago or the American Pacific Crest Trail.

More than 10,000 volunteers helped to make Useriu’s dream a reality, marking the route through the Carpathian Mountains. Four years since they started, the task is finally complete and the walking route has just opened.

Useriu was the first person to walk it, spending two months trekking from Putna in the northern part of Romania to the Via Transilvanica’s final stop in Drobeta-Turnu Severin near the Serbian border.

Through Switzerland and Italy to Rome on the Via Francigena

Another ancient road and pilgrim trail is the Via Francigena. It stretches more than a thousand kilometres, with most people starting at the Great St Bernard Pass in Switzerland and going through to the eternal city of Rome.

It is one of the oldest published pilgrimage routes in Europe and the full historical route takes trekkers from Canterbury Cathedral, England, to the tomb of apostles Peter and Paul in the Holy See in Rome. If you were to walk this entire 2,000km-plus route it would take more than 90 days.

On the Camino, there are albergues and pilgrim hostels to stay in but there aren’t any of these on the Via Francigena. It offers a different experience to the famous route but allows you to take in a variety of interesting cities along the way.

If you are looking for something further afield, there are two walking trails in Japan that are twinned with El Camino de Santiago.

The Kumano Kodo is a 70km pilgrimage route located on the Kili Peninsula on one of Japan’s largest islands. It is made up of several paths that lead to the Kumano Temple, which originated in the Middle Ages. It crosses a number of regions in south eastern Japan, running across mountains and passing through beautiful villages.

The other route, the Shikoku Henro, is located on Shikoku Island. It is circular, covering 1,200 kilometres and allows you to visit 88 temples along the way. There are four sections to the route corresponding to the four prefectures of the island.

Like the Kumano Kodo, it has its origins in the Middle Ages and was first mapped by the Buddhist monk Kukai, also known as Kobo Daishi. Kobo Daishi is considered an important figure in Shingon Buddhism and spent much of his life spreading this branch of the religion throughout Japan.

Trek through fjords and mountains on St Olav’s Way

Saint Olav’s Way in Norway is another ancient pilgrimage on Europe’s list of walking routes. There are seven possible routes that take trekkers through rural parts of the country to Trondheim Cathedral where Saint Olav is said to be buried.

Travellers have been using the route since 1032 with a number of shelters built along the way through its hundreds of years of history.

It’s a route that requires a bit more planning, with hotels and lodgings more spaced out than on other trails. What time of year to go is a big consideration, too, with bad weather and short days likely if you start in September. The optimum season is between May and August.

For a coastal walk through Turkey: Lycian Way

This route is a combination of several ancient paths walked by the Lycian people. It will take you along rocky coastlines next to flat turquoise waters and over deserted beaches.

Lycia is the historic name of the Tekke Peninsula that sticks out into the Mediterranean on Turkey’s southern coast. This route is a 509km-long path which takes you through some of the remains of the ancient civilisation that once ruled the region.

Lodgings are far apart on the Lycian Way, with some villages too far to walk between in a day. That means you may have to camp at some points along the route, carrying equipment with you while you walk to make this possible.