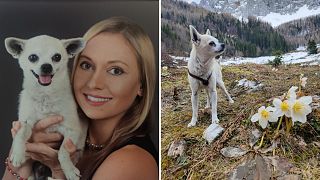 “I was a prisoner in my own mind until the day I met Teodor,” says Inga Ecker.

Twelve years ago, the 32-year-old from Carinthia in Austria picked up a tiny chihuahua at Vienna train station. Little did she know he was about to change her life.

“Before him, I always wanted to go somewhere but never really dared to. I always was waiting for my friends to go travelling and nobody really joined,” she tells Euronews Travel.

“And then with him it was so easy - we just went together. He changed my life, really.”

Since then, Inga - who works in IT for a German automotive company - has been to more than 80 countries and bagged 6,000-metre peaks.

“And it all started with him,” says Inga.

Sadly, Inga lost Teodor just weeks before this interview took place - but she wanted to share her memories of her transformative travels with her pet.

How did you start hiking with your dog?

“We did our first hike when he was super tiny,” recalls Inga. “I just felt so much more confident then, than this very small, scared chihuahua - I needed to protect him. I was yet to learn that he actually would be the one to protect me.”

Teodor didn’t stay timid for long. After nervously eyeing a river on their first trek, “he jumped from one side to the other and he just seemed to enjoy it so much,” says Inga. That’s where their love of hiking began.

“I was not into mountains [before], but going with him was so easy. It was so much fun,” she recalls.

Inga and Teodor began to take longer and more technical hikes. “We became really strong hikers together… Sometimes we would start in the middle of the night, we would reach the summit at sunrise and then we’d just sit there and watch the sunrise together.”

The duo went from strength to strength.

“Even until he got really old, he was always a strong hiker - even at the age of 11. Just last year, we did hikes of 1,000-metre elevation in one single push - it was not a big deal for him.”

Although the remote mountains on the Austrian, Italian and Slovenian borders became their go-to, the pair explored far beyond their Carinthian homeland - and even got Inga’s family into hiking.

What were your most memorable trips with your pet?

“One very beautiful trip was when we drove to the Dolomites and cycled the three famous peaks in a day,” says Inga. “Teodor was in this bag on top of the bike, barking - he could go on for hours and hours like that, it was just fun for him.”

She also recalls the freeing feeling of their first international trip when COVID lockdowns were lifted in spring 2021.

“We drove to Italy and stayed in a beautiful medieval castle close to Tuscany… It wasn't so much of an adventure, but I just remember feeling at ease that we were able to travel again… I felt so free and I could tell he did too.”

This type of trip was right up Teodor’s street. “He just loved fancy hotels, fancy restaurants. We always ordered some extra plates for him so he could join us for dinner,” Inga smiles.

How did people react to a mountain-hiking chihuahua?

Inga admits that she, like many people, had preconceptions about chihuahuas.

“I had this stereotype that you can’t do anything with this dog apart from walking around the city or a park.” But Teodor proved her - and everyone else - wrong.

Reactions to their mountain-climbing ranged from amusement to disbelief to respect.

“Lots of people were smiling at him, saying ‘He’d be better off in a handbag or in a cafe’ and so on,” laughs Inga. “Some people would come up and ask ‘Did you take the gondola up here?’ And I’d say, ‘No, we hiked up here!’ And they were surprised - they couldn't believe how he made it.”

Once the locals got to know him, their attitudes changed.

“Everyone kind of got to know him - Teodor, the strong hiker. And even his greatest critics, they turned into fans because everybody saw how strong he was.”

What are your tips for travelling with your pet?

“My main tip is super simple: just enjoy each and every single second with your pet, take in all their shared and wonderful experiences and never take a single day for granted,” says Inga.

Having just lost Teodor, she has touching advice for pet owners.

“When they're old, don't leave them behind. Carry them if you have to. They walked every path with you and they have been there when you needed them,” she says. “So when it gets difficult for them to walk, it's your turn to carry them, to be their guide - just as a return for all those beautiful memories and years you had together.”

For Teodor, hiking gave him strength, even as he suffered from a liver condition for four years.

“We consulted our vet about his condition and even she couldn’t believe he was still able to be so strong,” says Inga. “She actually thought it was because of all the hikes we did.”

While hiking isn’t right for every dog, spending lots of time outdoors being active can prolong your pet’s life and health. As Inga’s vet advised, if you can see your pet feels comfortable, there’s nothing holding you back.

By learning your dog’s body language, Inga says you can tap into their feelings. As a friend recently told her, “Dogs are like soldiers. They won't let you know that they’re in pain for as long as possible.” For this reason, she advises, “Don't push them or force them to do things they don't enjoy.”

As for mountain-hiking, Inga says you should train your dog in a similar way as you’d train yourself. When you set off, bring enough water, plenty of food, and warm waterproof clothing - for both you and your pet.

Start small, and build up your strength together.

And with any luck, you’ll find you have a friend like Teodor: “He was such a good dog… He was a badass.”