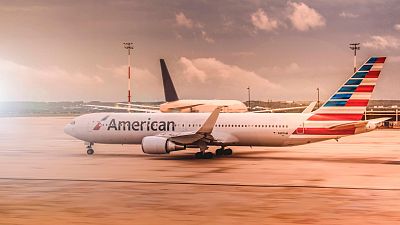 American Airlines staff have called off strike action after reaching a pay deal.

More than 50 maintenance technicians and crew chiefs were set to strike after 98 per cent voted in favour of the action. This could have impacted American Airlines' 23 daily departures from Heathrow.

However, the strikes were called off after the engineers secured a three-year pay deal worth 19 per cent, with the support of UK union Unite.

How much more will American Airlines engineers be paid?

Previously, the company had offered 5.3 per cent in year one, a one-off payment in year two and a pay freeze for year three.

“Unite’s focus is on making sure workers get a fairer slice of the pie by fighting for better jobs, pay and conditions. As this result shows, it is a strategy that is paying off for our members,” says Unite general secretary Sharon Graham.

Why did American Airlines' staff call a strike?

The engineers were unhappy with the original three-year pay offer proposed by American Airlines.

The Consumer Prices Index (CPI) rose by 9.9 per cent in the 12 months to August 2022, and inflation is projected to get worse in the coming years.

The airline reported a second-quarter revenue of €13.6 billion reported in July 2022 - a 12.2 per cent increase over the same period in 2019, despite flying 8.5 per cent less capacity.

“American Airlines has boasted of its strong growth and post-pandemic rebound so let’s see that translate into a better deal for the workforce.”

Which flights could have been affected?

The aircraft that fly these routes are maintained, repaired and certified for airworthiness by the workers who proposed strike action.

“American Airlines’ passengers are facing severe disruption because the company is offering a significant pay cut. American Airlines must return to the negotiation table with an offer our members can accept,” said Unite regional officer Joe McGowan.

American Airlines were committed to to averting strike action

In response to the strike proposals, American Airlines said “We’re committed to making sure all of our team members are paid well and competitively.”

After mediation with Unite to resolve the situation, the airline has successfully averted strike action.

News of the proposed strike came just days after Heathrow announced an end to its passenger cap on 29 October. The cap aimed to limit queues, baggage delays and flight cancellations after the industry struggled to cope with the rebound in travel post-pandemic.