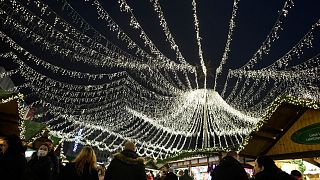 A German environmental group is asking the government to urge citizens to switch off Christmas lights this year.   -   Copyright  Roberto Pfeil/dpa via AP
By Giulia Carbonaro  •  Updated: 30/09/2022

'All is bright' on Christmas Day - at least that's what Germany’s most famous Christmas song, 'Silent Night', says.

But could a dimmer Christmas actually be better this year, as Europe struggles with skyrocketing energy bills and gas supply shortages?

One environmental advocacy group in Germany thinks so. Deutsche Umwelthilfe has called on the government to urge citizens to turn off their Christmas lights to save energy, as Russia keeps a tight hold on supplies of natural gas.

The German government has already introduced several measures to save energy this winter, including lowering maximum room temperatures in public and office buildings and switching off the lights of the capital’s monuments, including the famous Brandenburg Gate.

However, none of these rules applies to individual citizens.

But as Christmas approaches, the issue of the energy spent on the country's famous Christmas markets and decorations has been raised by many.

Deutsche Umwelthilfe (DUH) which is a politically independent, non-profit organisation that has been advocating for the protection of the environment and a sustainable lifestyle for the past 40 years, says Christmas lights in houses, flats and cities should be unplugged this year.

"We are not calling for Christmas markets to be cancelled," clarifies Jürgen Resch, DUH Federal Managing Director, talking to Euronews.

Resch suggests that dimming the Christmas lights this year could also lead to a more thoughtful celebration.

"A contemplative mood is perhaps even more likely to arise if [we are more selective with our decorations in] this special time of year," he said.

"In Switzerland, several department store chains have decided to do without special Christmas lighting for their buildings - an example for Germany as well."

According to Resch, private households used six per cent more electricity for Christmas lighting than in the previous year, a total of 623 million kWh consumed - as much as the annual consumption of a city with 400,000 inhabitants.

With this data in mind, turning off the lights for Christmas could be nothing short of revolutionary - not only for saving energy but also for climate protection.

"Moderation also applies to the excessive lighting of private houses, apartment facades and gardens decorated with thousands of lights, which has increased sharply in recent years."

Where else is cutting down on Christmas lights?

Other cities in countries like Spain and Portugal have moved to turn off or dim the Christmas lights this year.

The mayor of Alicante in Spain has announced a proposal for all municipalities in Valencia to turn off 20 per cent of Christmas lights this year.

This week the Portuguese government published guidelines recommending Christmas lights be switched on only between 6 pm to midnight from 6 December until 6 January.

Will Germany switch off its Christmas lights?

Germany is very attached to its Christmas traditions, with its Christmas markets being among the most famous in the world and the country following a number of traditions.

In the lead-up to Christmas, German families bake traditional cookies, light up a candle every Sunday for four weeks and drink 'Feuerzangenbowle' (a very strong version of mulled wine over which a rum-soaked sugarloaf is turned on fire) and Glühwein in the streets.

It's hard to guess how Germans feel about going dark this winter during Christmas time. But it's also important to note that Germans don’t have the tradition of decorating their homes with thousands of bright lights, as people are known to do in the UK and US.

Whether the big Christmas trees dominating the centres of German towns and the lights adorning traditional markets will be unplugged this year remains to be seen.