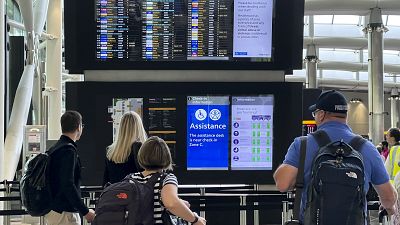 October’s half-term break is coming up in the UK, but sky-high airfares make it unlikely that Britons will catch much of a breather.

With the pound at its lowest level against the US dollar since 1985, energy bills skyrocketing and winter looming, holidaying abroad has already become an expense many can’t afford.

The steepest price increases were found for flights from London’s Heathrow Airport.

A flight from Heathrow to Spain’s Tenerife cost passengers who booked six weeks in advance an average of €290 (£262) more each way than in 2019. This means a family of four going on holiday to Tenerife would need to fork out an additional €2,325 (£2,096) just on flights.

Why are flights so expensive now?

Flights are normally more expensive during the school holiday season - and two years of pandemic-linked travel starvation have pushed demand to unexpected heights. But it’s not just increased demand that is pushing prices up.

During the pandemic, airlines grounded part of their fleets and let go of staff, which they are now struggling to replace. As companies contend with reduced capacity, they’re also facing increased fuel prices as a war-fuelled energy crisis unfolds.

After chaos struck several airports across Europe this summer, with staff shortages leading to delays and cancellations, some airports introduced daily capacity caps to passengers and flights.

Among these, Heathrow has capped passenger numbers at 100,000 a day until the end of half-term break on 29 October. In 2018, the airport recorded a daily passenger number of almost 220,000.

How can you save money on half-term holidays?

But as there’s no turning back time, this advice only makes for a good thing to note down on your calendar for next year.

If you still have to book this year’s half-term break holidays, check all your options. Which? research found that travelling from Stansted or Luton - if you’re based in London - is often much cheaper than flying from Heathrow.

If, instead, you’re considering staying in the country, check out our pick of the best staycation hotels in England.