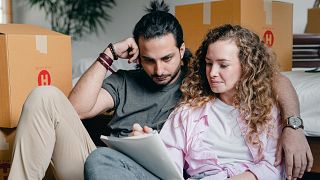 Moving abroad is exciting in many ways, but it also requires a lot of research - from where you’ll live to how you’ll get there and the language you’ll need to learn.

Cost of living is a major deciding when choosing your new home - particularly in the current economic climate. It is especially important for those hoping to reduce their bills by living in a cheaper location.

So how do you work out what your food shopping or rent for the month will cost?

Numbeo, a crowdsourced online tool, could be the answer. The Serbia based website draws together information from users all over the world about the price of everyday purchases.

“Everyone can add the data, like Wikipedia,” Mladen Adamovic, CEO of Numbeo tells Euronews Travel.

What does Numbeo’s data reveal about different countries?

Numbeo is a cost of living index that has data for most cities around the world. Data is presented using colour-coded pins on a map. But you can also directly compare your current city of residence with the place you are hoping to move to and it shows you prices side by side.

Comparing Lyon, France to London for example, reveals that rent and restaurant prices are higher in the UK capital. Grocery prices, however, are actually around 20 per cent lower in London.

Comparisons include a list of specific everyday items too like a litre of milk, a kilogram of apples or even a packet of cigarettes. For those looking to stay long-term, there are prices per square metre for purchasing apartments inside and outside of the city centre.

If you aren’t looking for specifics, Numbeo’s data provides an overall figure that shows in London, to maintain the same lifestyle as you had in Lyon, you would need €1,756.79 more per month.

Users can also add data about factors that impact quality of life, such as traffic, safety and healthcare.

How does Numbeo keep its data up to date?

Adamovic, Numbeo’s CEO, explains that the tool uses adaptive archive technology to make sure information is up to date. A vital feature in the face of today’s ever-fluctuating prices.

“That means if there are, for example, 120+ people contributing a certain price in Munich in the past three months, we archive entries older than three months.”

The more entries they get, the better they can account for the changing costs of inflation.

“Our primary target is people who are considering relocation from one country to another so that they can estimate if that move would be money-wise,” says Adamovic.

“That includes people who want to relocate to cheaper countries, the website helps them in choosing a new location.”

Cost of living comparisons could be particularly helpful for digital nomads

The online tool is especially useful for those only looking to spend a few months abroad - like digital nomads, says Adamovic.

“Numbeo is frequently visited by digital nomads,” he explains, “I guess as many are staying for a few months in a certain country, they are checking the prices before they go.”

He says that Numbeo is the most popular website by internet traffic for people checking prices in other cities and countries.

Italy: Where is the cheapest place to live?

Many dream of moving to Italy, whether for retirement or earlier in life. With the country launching a digital nomad visa, it could get easier to live and work from Italy.

Looking at costs in the country gives some interesting results. Comparing the capital city Rome to, for example, living in Naples reveals the south is cheaper on all fronts - particularly rental costs which are 44 per cent lower.

Further south in Palermo, Sicily rental prices are even cheaper at almost 58 per cent lower than in Rome.

But Numbeo can be used to compare the cost of living all over the globe, not just in Europe. Those looking to take advantage of digital nomad visas further afield in Bali, Indonesia for example will find that perhaps unsurprisingly, prices are significantly lower.

Compared to Paris, the amount you can expect to pay for a meal at an inexpensive restaurant could be almost 90 per cent lower on average in Bali. If you're looking for a bottle of red wine, however, expect that to be more than 100 per cent more expensive than it would be in France.

It’s this level of specificity that makes the cost of living tool appealing for those looking to work out the realities of becoming a digital nomad or expat.

What are Europe’s best restaurants for flexitarians?