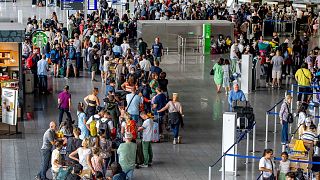 People's suitcases have been caught up in the chaos at Europe's airports this summer.   -   Copyright  AP Photo/Michael Probst
By Lottie Limb  •  Updated: 17/09/2022

Losing things while abroad is, sadly, part and parcel of travel.

I sometimes think of the items I’ve lost on holiday - a beautiful blue scarf in Dublin, a well-worn jacket on the walls of Antibes - and like to imagine them all reunited somewhere, off on adventures as a complete outfit.

But there’s no doubt that losing a whole suitcase, containing all the things you’d specifically packed as essentials, is far more galling. And it’s been an unfortunate reality for many travellers this summer as airlines and airports grind back into gear post-COVID.

More than a million bags were at least temporarily lost by US airlines between January and June this year, official figures show, at a rate of 0.62 bags mishandled compared to 0.44 in the same period last year.

The number of travellers reporting lost luggage jumped by 30 per cent this year, compared to 2019, according to Spanish insurance firm Mapfre.

During what some dubbed the “summer of lost luggage”, the media was full of extraordinary stories of travellers going the extra mile to retrieve their belongings. We look back on a few here, and track the trend of the season.

The rise of technology in tracking down lost bags

Apple’s ‘Find my iPhone app’ launched more than a decade ago, and has helped countless people reunite with their lost or stolen mobiles. In September 2019 the tech giant upgraded its service into a more general ‘Find My’ app for all its devices. It’s proved very useful for travellers.

A British Airways passenger who left his Airpods on a flight from Texas to London in June spent weeks watching them move around with the suspected thief via the Find My app.

Another man flew more than 4,000 miles and spent £2,300 (€2,656) to retrieve the earphones he lost on a flight, after pursuing them around the world for five months.

"I didn't really expect to get them back and I joked that flying to Doha to get them is the pettiest thing I've ever done," he told news site JOE. "But it's just great that we managed to find them - and now I don't need to buy a new pair!"

Of course most people are unlikely to stow away their Airpods during a flight. It’s a new device that has really taken off when it comes to finding stranded suitcases: the Airtag.

Apple launched its tracking device last April: a tiny gadget around the size of a 1 euro coin, designed to help people keep track of keys, purses and other valuables.

The Bluetooth-connected device works by sending out a secure signal that can be detected by devices in the ‘Find My’ network, which then send the tag’s location to the iCloud where it can be seen on your phone’s own Find My app - provided you first registered it there.

In August, an Airtag helped with the carriage of justice in Florida when it led to the arrest of an airline employee accused of stealing thousands of dollars worth of items in luggage.

An investigation was launched after a passenger reported that her bag never made it to the final destination. An Airtag in her suitcase led police to the airline worker’s home.

Should we be wary about using Airtags?

Given the surge in lost luggage, it’s understandable that people are getting more tech-savvy and praising the rise in vigilantism these devices inspire.

But knowing where your bag is doesn’t necessarily get it back any quicker, and there’s a darker side to Airtags too. Domestic abuse charities have noted an alarming uptick in stalkers using them to keep tabs on their ex-partners, concealing them in cars and coats for example.

“I saw Airtags for sale in my local supermarket,” Emma Pickering from Refuge charity told the Guardian. “People see them, think about tracking more, and the concept of tracking becomes more established. We’re normalising it.”

As ever, it’s important to think about the flipside of inviting new technology too firmly into our lives, when regulations and safety standards often lag behind.

As frustrating and dangerous as lost luggage can be - for those carrying medical equipment - it’s also worth remembering that beleaguered airline staff are far more likely to be on the other side of the equation than a flighty thief.

A human touch goes a long way too. Berlin-based writer Erin Porter was able to help get her father-in-law’s misplaced bag back by following advice she found on a Facebook advice group called BER Airport security and check-in.

“People reported they were having success by going to the lost baggage counter and begging or badgering their way into the luggage room to find their bags themselves,” she wrote.

“After waiting for over an hour in line, my husband was prepared with info he had on the bag, flight, and even a Vollmacht (permission) from his dad.” They were allowed into the luggage store, and found it within 30 minutes, proving an old-fashioned luggage tag has certainly not outlived its usefulness.

Why have so many bags gone missing?

London’s Heathrow Airport made headlines in June, when a mound of lost luggage started to cause a stink in Terminal 2.

A technical fault with the airport’s baggage scanning system was to blame in this case, but it's airlines that are responsible for most of your bag’s journey.

Airports security scan outgoing baggage, but the rest of the process is handled by airlines and their ground handlers who check in luggage, load and unload it from planes, and return it to baggage halls for people to collect.

The bulk of bags that go missing are transfer bags which miss their connections, either because the first flight is late or the airline lacks the necessary number of ground handlers.

Ground staff have struggled with particularly precarious working conditions over the last couple of years and, like others in the aviation sector, have resorted to striking this summer - further adding to travel and baggage chaos.

It’s also key that airports stay up to speed, however. Heathrow is seeking to replace its Terminal 2 baggage system, which is more than 50 years old.

A spokesperson for the airport adds that over 99 per cent of bags have travelled with their owners over the last five years.