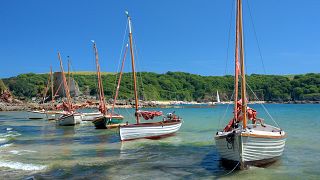 With the rising cost of living, many Brits are putting their autumn holiday plans on hold. If you're among the vacationless hordes, don't let the doom and gloom consume you just yet.

The UK is packed with stunning staycation spots, which you can reach by train or car for a stress- and guilt-free escape. These eight UK destinations prove you don't need to travel to Europe to feel like you're abroad.

This fairytale castle looks like it would be at home in Belgium or France. In reality, Scotney Castle is located in Kent - just under two hours' drive from London. The National Trust property is surrounded by picturesque gardens and a wooded estate, where you can escape the buzz of the city.

7. Salcombe, Devon: Sail away to the French Riviera

Yearning for a sun-soaked escape to the French Riviera? Devon is the next best thing. Located within an Area of Outstanding Natural Beauty, the pretty town of Salcombe draws celebrity visitors for its rolling countryside and coastal vistas. With the likes of Kate Bush and Mary Berry snapping up property in the area, you're unlikely to be able to afford to move here, but an abundance of holiday homes mean there are plenty of options for a short break.

6. Saint Michael's Mount, Cornwall: Fancy yourself in the north of France

Similar in both name and look, St Michael's Mount in Cornwall is the British counterpart of Mont-Saint-Michel in Normandy, France. The tidal island is linked to the town of Marazion by a cobbled granite causeway, which you can stroll across at low tide. Once on the island, climb up to the medieval church and historic castle through sloping gardens teeming with exotic plants.

5. The Shetland Islands, Scotland: Let the Northern Lights transport you to Norway

Who needs to trek all the way to Norway or Iceland to see the Northern Lights? The aurora borealis can be seen from various spots in Scotland - particularly in autumn and winter when the nights grow longer. The Shetland Islands are a great place to start your search, though when the theatrical display is particularly strong, it can even be seen from Arthur's Seat in Edinburgh.

From Vikos in Greece to Verdon in France, Europe has no shortage of breathtaking gorges for hikers to explore. If you're confined to the UK for the foreseeable, check out Cheddar Gorge in Somerset, where towering limestone cliffs conceal subterranean caves dripping with stalactites. Named for the nearby village of Cheddar, which gave its name to the UK's favourite cheese, this a spot to gorge in more ways than one.

We could pretend that Little Venice will transport you to Italy's iconic waterways, but in reality the pretty London district is far more akin to Amsterdam. As you watch colourful barges float past envy-inducing mansions from the comfort of a cute cafe, you'll forget the busy streets of Paddington are just a short walk away.

2. Minack Theatre, Cornwall: Be transported to the Roman ruins of Spain

When you come across the Minack Theatre carved into a granite cliff overlooking Porthcurno Bay, you'll think you've stumbled across a Game of Thrones set. Eschewing the bloody history of Roman amphitheatres across Europe, Cornwall's spectacular open-air arena opened in 1932 for a local production of 'The Tempest'. It remains an active theatre from May to September, and thanks to its atmospheric backdrop is one of the best places to see Shakespeare's stormy comedy.

1. Anglesey, Wales: Pretend you're on a lovers' retreat in Mallorca

Wild goats cling to rugged outcrops on the Welsh island of Anglesey, calling to mind the Tamuntana mountain goats that leap between Mallorca's rocky crags. At Llanddwyn, a sandy beach with views of Mount Snowdon leads the way to Ynys Llanddwyn, a small tidal island famous for its connection with Saint Dwynwen, the Welsh Patron Saint of lovers.