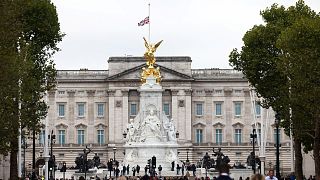 Yesterday, Buckingham Palace announced the death of Queen Elizabeth II. After spending a record-breaking 70 years on the throne, the UK now enters a period of mourning for Her Majesty.

One of the first things you may have noticed following the announcement is flags on popular tourist attractions like palaces and royal residences being lowered.

Following the death of Her Majesty The Queen, the UK government issued instructions on how flags must now be flown. This guidance has been passed down from King Charles III, the new Sovereign.

All official flags including the Union flag will need to be flown at half-mast as soon as possible. Only the Royal Standard will remain in its usual position. This is because there is always a living monarch and the throne has immediately passed to King Charles III.

Half-mast means the flag is flown a third of the way down the flagpole from the top. There must be at least the height of the flag between the top of it and the top of the flag pole.

They will stay that way until 8am on the day following the Queen’s state funeral as a sign of respect.

The UK isn’t the only place honouring the Queen in this fashion either. President of the US Joe Biden has also ordered all US flags to be flown at half-mast until the funeral.

They will be lowered on all US government buildings, embassies and military bases around the world until “sunset on the day of interment”.

Why do flags fly at half mast as a sign of respect?

In many countries around the world, a half-masted flag is seen as a symbol of mourning or respect. The tradition is thought to have begun in the 17th century and some sources say it is because the flag is lowered to make room for an invisible flag of death flying above it.

What half-mast actually means varies depending on the country. While in the UK, the flag can’t be lower than two thirds down the pole, others say it should be just the height of the flag from the top. While some take it literally to mean half way down the pole.

There is a list of reasons why a flag may be flown at half mast in the UK aside from the death of the Sovereign including the funerals of members of the royal family, funerals of Prime Ministers, and funerals of foreign rulers - all are on the command of the current Sovereign.

Flags won't just have to be half-masted following the Queen’s death, either. Thousands emblazoned with ‘EIIR’ or The Queen’s colours that fly everywhere from naval ships to outside of police stations will need to be changed.

Flags are just one of the many places where the Queen’s image and iconography will need to be unpicked from the fabric of UK life.